Collegio Alberoni is a famous building, rich of charm and treasures, which began to be constructed in 1732 by Cardinal Giulio Alberoni.

Giulio Alberoni (Piacenza 1664-1752) was a churchman, a man of the world, a capable politician and diplomat, a businessman, a learned art collector and a munificent benefactor of his native town. After his studies and early steps in the ecclesiastical order, he started his brilliant political and diplomatic career serving Francesco Farnese, duke of Parma, during the war of Spanish succession (1702-1713). Abbot Alberoni managed to win the king of France’s favour and, above all, the favour of Philip Bourbon duke of Anjou, who was to become king of Spain as Philip V. He became his most authoritative counsellor and a sort of Prime Minister. Thanks to his diplomatic success, he was appointed cardinal by Pope Clement XI in the secret Concistory on July 12, 1717. In Rome he was officially conferred the scarlet hat by Pope Innocent XIII on January 12, 1724. He spent there the most peaceful years of his life till 1735, devoting himself to social relations, collecting works of art for the fittings of his residences, the Palace of the Guardian Angels in Rione Trevi and also the suburban villa near St Agnes in Via Nomentana.  Thanks to the favour of Clement VII and Benedict XIV, a new phase of his ecclesiastic mission started within the Roman Curia. On account of his proven experience he was entrusted with the government of the Legation of Romagna (1735-1739) and, later on, Bologna (1740-1743), but the biggest achievement of Alberoni during his active old age, was the College for the education of young priests, which construction, just outside the town of Piacenza not far from the old St Lazarus’ Hospital, started in 1732. He took care in person of pulling down the old building, as well as the planning and construction of the new one, but then he entrusted its management to the Congregation of the Mission, established by St Vincent de Paoli. In the autumn of 1751 the College welcomed the first eighteen young people and on 26th of June 1752, when the cardinal died, he left all his properties to the charitable institution which still preserves them. 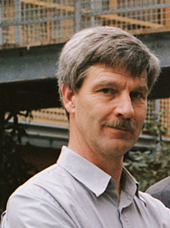 The colleague and friend of Ton, Aaldrick Tiktak, will hold the commemorative speech for the memory of Ton Van der Linden in Sala degli Arrazi of Collegio Alberoni.

Ton graduated in 1983 from Wageningen University with an honours degree in soil science. From 1983 to 1986, he worked as a scientist at the Wageningen Institute for the Application of Nuclear Energy in Agriculture (ITAL). In 1986, he started working at the National Institute for Public Health and Environment. It was there that he formed his long‐standing interest and made of it a career in pesticide fate and modelling. Ton liked to think in scientifically sound but practical ways. As a son of a farmer, he had great knowledge of farming practices. This coupled with his knowledge of pesticide fate and modelling made him a rare and valuable person. In the Netherlands, he was known as a ‘walking encyclopaedia’.

Ton’s main drive was to contribute to improving the scientific quality of regulatory risk assessment. In 1989, he contributed to the development of one of the first pesticide leaching scenarios used for regulatory purposes. This dramatically improved the decision‐making process: before that time, decisions on authorisation of plant protection products were made on an ad hoc basis by the Dutch Ministries. In 1992, Ton was one of the people who took the initiative to start the FOrum for the Co‐ordination of Pesticide Fate Models and their Use (FOCUS). In this context, Ton contributed to a working group on soil, a working group on establishing leaching scenarios for the European Union (EU) and a working group on degradation kinetics. With some modifications, this work is still being used in the regulatory process in the EU today. Ton was also one of the group members who took the initiative to develop a spatially distributed version of a pesticide leaching model. This development formed the basis of modern risk assessment in the exposure area. It was a significant breakthrough because it made the calculation of frequency distributions of the leaching concentration and the development of statistically sound exposure scenarios possible.

Ton was a member of the EFSA’s PPR Panel from 2009 to 2015. He was actively involved in discussing, reviewing and peer reviewing of PPR Opinions and EFSA Guidance. At the time of his death, he was still an active member of the working group mandated to review the guidance that governs EFSA’s approach to time‐dependent sorption in environmental risk assessment. Ton put a lot of effort into these working groups and was committed to achieving the highest possible quality.

Ton participated to the Symposium in Pesticide Chemistry since the first editions. During the last edition, in 2015, he was the chair of Monitoring Session and at that time, in an interview that can be viewed here http://archive.symposiumpesticide.org/, he was hopping in a harmonisation of monitoring procedures of groundwater and use of the data in the registration processes.

Ton was very popular with scientists of pesticide field, not least for his collaborative attitude. With Ton’s passing, the scientific world has lost an outstanding scientist and a loyal and friendly colleague. We have been strongly motivated by Ton’s example and will aim to continue the good progress that he has achieved. 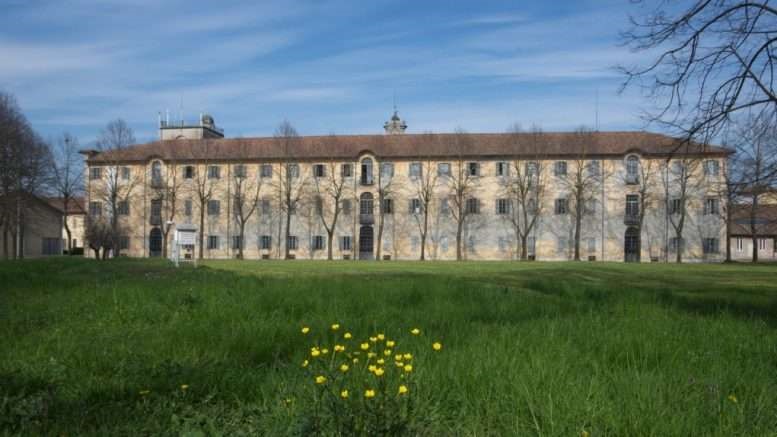 The Dinner will be held in the lovely garden of Collegio Alberoni. All participants will be welcomed with good Italian wine and food, and will experience the typical Italian Aperitif.

Furthermore, a student jazz band will accompany our evening, having Daniele Sartori on the guitar, Giancarlo Patris on the double bass, Matteo Valentini on sax and Giaccomo Bignotti on the drums. 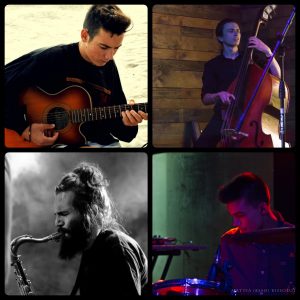 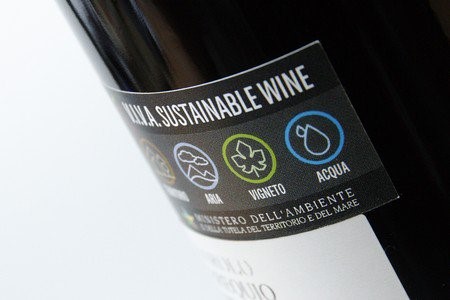 During this session, the participants will have the possibility to taste several DOC wines of the Colli Piacentini that have the Sustainability certification and labelling V.I.V.A., national program of the Italian Ministry for the Environment, Land and Sea. 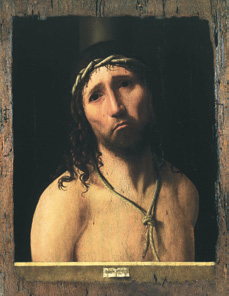 During the registration, you will be asked to register for the GUIDED VISIT to Collegio Alberoni. The visit will start from the Cardinal’s apartments with its beautiful collection of paintings. Giulio Alberoni started collecting works of art early in his youth in Piacenza. Later on, he enriched his collection during his stay in Spain and above all in Rome starting from the 1720’s. The cardinal enjoyed good relations with various contemporary artists, but he was also interested in the collection of work of artists of the previous centuries, like this unforgettable Ecce Homo by Antonello da Messina – one of the masterpieces of the author – and other famous paintings like those by Jan Provost.

The visit will continue with the library of the College, with its collection of 130.000 books and with the unforgettable refectory.

The visit will end with the Cabinet of Physics and the Museum of the Scientific Instruments. The visit will be available for maximum 60 persons, divided in two groups. Visit duration: 30 min. 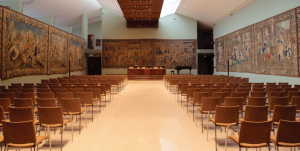 The collection of tapestries left by the Cardinal in Sala Arazzi is highly valuable both for the quantity of the pieces and their quality. The 18 magnificent masterpieces are divided into three different series. Eight pieces, known as the Series of Aeneas and Dido, were woven by a tapestry weaver from Antwerp (Michel Wauters, around 1670), from paper drawings by Giovan Francesco Romanelli, the best alumn of Pietro from Cortona. Eight more pieces, known as Alexander the Great Series, were woven by an unknown Flemish Tapestry weaver who worked in Brussels during the second half of the 17th century (probably Jan Leyniers), it is thought from paper drawings by Jacob Jordaens, one of the most important followers of Rubens. Last but not least, the most ancient and valuable tapestries belonging to the called Priam’s Series. You will all be introduced to the tapestries collection just before the Gala dinner. 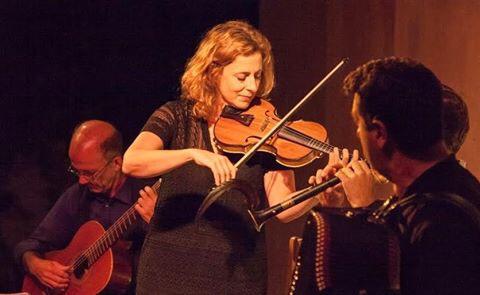 During the Gala Ninner ENERBIA group will accompany us with traditional music, for an unforgettable experience. ENERBIA is one of the most active Italian groups in the field of ancient and traditional music, that of the North West of Italy, from the planes to the Apennines. The course of the river Po, between Lombardy and Emilia, is the northern gate of a territory that starts from Milan and across the Apennine valleys reaches the sea. Since ancient times these territories have connected the European continental world with the Mediterranean through the ancient Salt Roads and the Via Francigena with its variants. This physical landscape is reflected in soundscape, transmitted orally in traditional music, which is still very much alive today. We will listen to original instruments such as the double reed bagpipes together with the violin and the accordion, songs about love and travel, group dances like the ancient jigs and wonderful folk waltzes.

If you have special dietary requirements, please contact lucrezia.lamastra@unicatt.it.

Participants will leave from the conference site by bus at 2.00 pm. The expected arrival time to Malpensa airport is 4.00 pm, while to Orio al Serio airport is 6.00 pm.